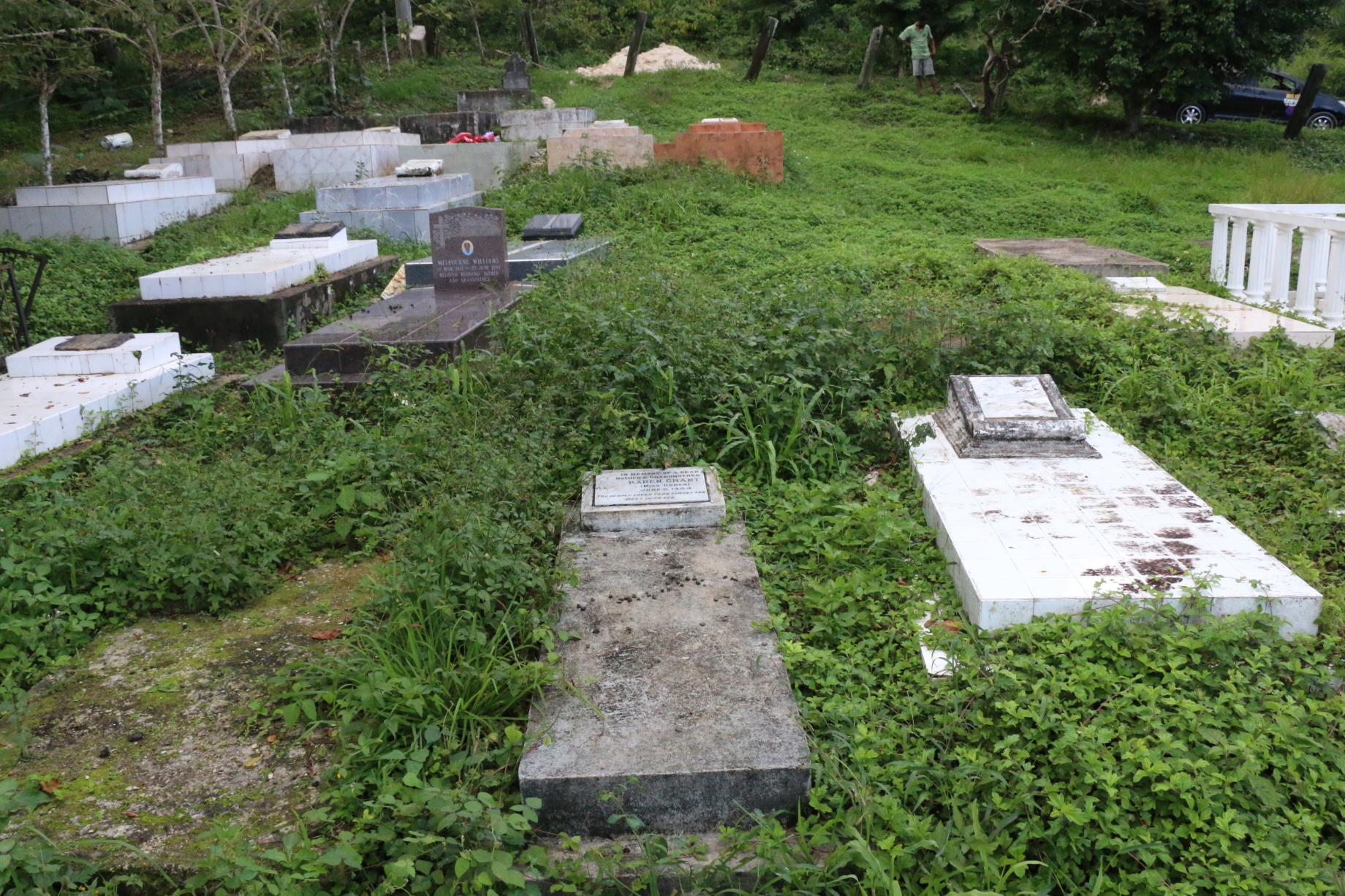 by Karen Georgia A. Thompson

My maternal grandparents were both born in the 1890’s, less than about 60 years after slaves were emancipated in the British colonies. Their lives and those of other ancestors came alive as I heard stories and read documents on the internet. History is realized in many ways. There is much to know of history that cannot be gleaned from the books that grace our classrooms and line the shelves of our libraries and bookstores. Visiting with the ancestors is about walking the cemeteries and noting what is present, but mostly what is absent as well. They too have a story to tell, if we are willing to listen.

Prior to this visit to Jamaica, the history of life in Jamaica was just that. I learned the history of Jamaica in school. I learned then that “Christopher Columbus discovered Jamaica in 1494.” The truth is:  Columbus was lost when he happened across the islands of the Caribbean on his way from Europe to India. Hence, the Caribbean came to be known as the “West Indies,” to be differentiated from that other place he was looking for to the east.

When Columbus arrived in Jamaica he landed on the north coast of the island. The exact location is disputed, but the town of Discovery Bay, St. Ann got its name because it was thought this was the site of Columbus’ landing. When the Spaniards arrived in Jamaica, they found the indigenous people who were known as the Arawaks. That they were called the “Arawak Indians” had more to do with a lost Columbus that it had to do with the heritage of those who inhabited the island.

The enslavement of the Arawaks brought their demise. In history class, we were taught that the Arawaks were a gentle people who were were overworked in an attempt to use them for labor. Additionally, their exposure to the diseases introduced by the Europeans eventually drastically reduced the population. The Spaniards occupied the island until the 1600’s when the island was invaded by the British. The Spaniards lost. Therefore I write and speak English. The presence of Africans in Jamaica came in part because of the Transatlantic Slave Trade.

Slaves were trafficked by the Spanish and the British. When the British invaded, some of the Africans on the island were able to escape. Others were granted their freedom by the Spanish for assisting and ensuring their safe departure from the island ahead of the pending defeat at the hands of the British. Those who could, fled to the hills and the mountains. Later to be known as the Maroons, who provided leadership to slave rebellions and home to other slaves who were able to escape their oppressors. Maroons were later deported to Nova Scotia, Canada and then to Sierra Leone to diminish the threat they posed on the island. The slave trade in Jamaica and other British colonies was abolished in 1808. Emancipation was granted across the British Empire 1 August 1834.

My visit to Jamaica and my desire to learn more about my grandparents and ancestors was itself a history lesson into life in Jamaica post-slavery under colonialism. The history books were a resource, as were the stories that required verification and the hours I spent on the internet searching through birth, death and marriage certificates accessible electronically, thanks to the Church of Jesus Christ of Latter Day Saints. Thanks to the Mormons, I could sit in front of my computer and scream rather than doing so in public, as the colonial past of Jamaica became very clear and real to me.

My maternal grandfather was born in Higgin Town, St. Ann in 1895. His older sister Josephine was born two years earlier. I found their birth certificates as well as the marriage certificate of their parents, my great-grand parents. My grandfather was known to me as Albert Grant. His children all knew him by that name. His birth certificate however recorded his birth name as: Ezekial Grant. His date of birth was also a source of some contradiction as the birth certificate on record was contrary to the prevailing oral narrative regarding the place and date of his birth, as well as his name at birth.

These maternal ancestors have names. My great grandparents: William Harrison Grant (b. 1865) and Dorlian Murphy Grant (b. 1869). I later found their marriage certificate. Listed there were the names of their fathers: Philip Grant and Richard Murphy. Those are my great great grandfathers. And then there was Isaac Stephenson, the other great grandfather found on my grandparents marriage certificate. With no birth certificate for my maternal grandmother, I cannot go much further. The search for the ancestors is like an addictive puzzle that keeps calling me back to know more, to find more, to date and name these people who are a part of me.

I have a great appreciation for these ancestors. What did I learn about them? I know their names. I found birth certificates, marriage certificates and death certificates. I have learned more in the past nine months than I knew over the course of this life time. I believe they were hard workers, people who worked the land, people who worked hard to farm, to eat and to live. I have a deep love for these ancestors. And I want to believe they love me too. I keep listening, listening for their untold stories that come in the silence and visit me in my sleep. There are stories yet to be told. Stories tied to a past long forgotten.

I know my maternal grandmother, Mary Jane, could not read when she got married. She signed her mark – an “x” – on her marriage certificate. She had a total of 14 children. She had three before she married my grandfather, one of who died very young. I found this daughter’s birth and death certificates on the internet. A surprising find since none of the aunts or my mother knew of her. She was Aunt Sislin. Aunt Sislin was born and died in 1919. She was two months old.

There are birth certificates on file for the other two children, my aunt and uncle: Edna Stephenson and Stephen Stephenson. That their brothers and sisters do not know them by those names is consistent with so many other children of that generation, born to parents who were unwed, who were registered with their mother’s surname names and lived with their father’s.

Dorlian (Darlian) Murphy Grant, my great grandmother, signed her mark as did many of the other women that I found marriage certificates for. My grandmother did the same. The men were able to sign their names, which I am sure was a source of pride. The evidence of generations of uneducated women, unable to read or write, a legacy of a system that deemed them unworthy of anything more than an “x” as an identifier on paper, helped me to value the gift of being an educated Black woman in any century.

The father’s are listed on marriage certificates. No mothers. If the parents were not married, then only the mother was listed on the birth certificates, and the children were given the mothers’ names on paper. No fathers. However, the children grew up with their father’s last names. This made it hard to find many individuals. Navigating the land of the dead is challenging when there are no sources to ask the questions. I ask the questions, attempting to unearth the stories they want to tell and keeping their secrets when no one wants to hear.

Yet the ancestors continue to reveal themselves. They are speaking in their own way. I am learning to listen to their stories. These strong women, though uneducated have a lot to teach me. Like the history books, one has to look beyond that which is recorded to find the truth. The truth in these stories is a common tale of life in a post-slavery Jamaica, where men and women were undereducated and uneducated by a system that determined their worth based on the color of their skin.

This colonial system of oppression continues to grind much the same over a hundred years later. Hard labor, lack of education, under education, early pregnancies and high infant mortality speak from the past into a present and a future that begs that we learn from those who have gone before.

And then, there is the sad reality that many of these ancestors will not be found. There was a time when there were no birth records for my people, these people, descendants of Africans brought to work the fields and plantations, transported in the bowels of slave ships. Babies were baptized or christened in church. Those records have some babies, not all babies, babies whose parents were allowed to sit in church and own their place as good Christians had their children in those pages.

Those pages tell yet another part of the story. They tell the story of the Church and its complicity and engagement in the enterprise of chattel slavery and upholding systems of oppression that rendered people invisible, treated as cargo and counted like livestock.